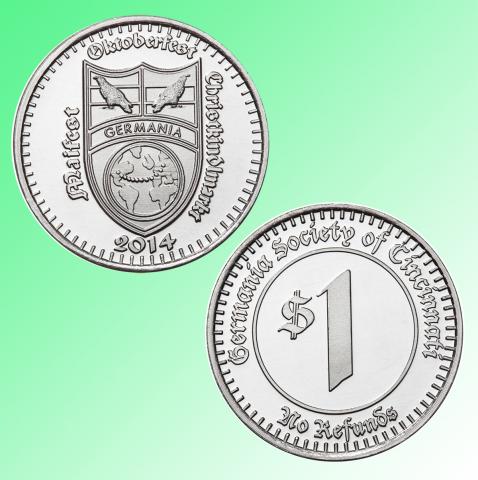 (Cincinnati, OH) - For the thousands of visitors that go each year, Oktoberfest is a time honored tradition: a time to indulge in traditional German culture, food, and beers. This year, visitors got all that—and some schnitzel to boot, without any of the standing in line or fishing through wallets for exact change that until this year had been part of the time-honored tradition.

The Germania Society of Cincinnati, which runs three German-themed festivals every year, switched from cash to tokens as a means of exchange, and saw not only a profit increase, but a more streamlined and easy to use sales system. Dennis Imwalle, Treasurer at the Germania society, was encouraged by an article he read in IE about an Oktoberfest in Mt. Angel, Oregon. He contacted the Mount Angel Oktoberfest officials who had successfully introduced tokens more than twelve years ago and sought their advice. The Mt Angel people were very helpful, and even offered some easy to follow rules for making the switch.

More coin in the lederhosen, more time too

The Germania Board was receptive to his token proposal and unanimously approved   implementation at its major events.   A Tokens Committee was subsequently organized to carry out the Board’s directive.

The committee decided to try the switch from cash to tokens during their Maifest in May before the larger and more popular Oktoberfest in August. Setting up the festival logistics was relatively easy. Three token-selling booths were set up across the festival grounds to maximize patron access, each with either an ATM or an iPad equipped with a POS card swiper. The iPads were a new addition, and required wireless throughout the park.

There were Wi-Fi systems installed in the park to provide ready access to the internet. Total wireless installation cost approximately $3,000.  It was a worthwhile investment though, as 30% of the token sales were through credit cards.

Once the system was in place, the sales started piling up and the lines started shortening. It turned out at Maifest that using tokens is 5-10 times faster than cash transactions—there is no need to make change, and the beer or soft drink is being poured and served while the customer is putting down the tokens. Food is harder to serve as quickly because it takes more time to put a brat on a bun and add sauerkraut, so naturally it doesn’t move as fast as drink transactions.

“We have some beer booths that sell more than 45 half barrels a day. You can’t imagine how easy this is with tokens,” Imwalle said.

The tokens were such a success that they were a no-brainer to use at Oktoberfest, which attracts 4-5 times as many visitors. The Tokens Committee realized from the test-run at Maifest that staffing the token booths would require a lot of workers, as each booth requires 8-10 people. Luckily for the committee, the Germania Society has over 700 members.

The major reason for using tokens is that large amounts of cash are much more secure because there are fewer “cash touches” by workers.

There were no line bottlenecks created by tokens since the speed of transaction is incredibly fast.   For example, soft drink booths alone saw an 8% sales increase. You‘d have never known that it was a new system— the transition was seamless.

With tokens, the point of sale is not the only part that’s faster—counting each booth’s sales and the festival total sales are also sped up. Each service booth is set up with a token catcher—basically a large bucket with a lockable lid. At the end of each day, a worker from each booth brought the bucket to the Treasurer’s office and put the bucket on a scale. In less than 30 minutes, all the day’s sales were counted and most of the workers—all volunteers—were allowed to go home early.

The speedy turnover after a sticky day of handling beers and bratwursts is in sharp contrast to previous years, where the counting took hours. Volunteers who were giving their time for free had to wait around until as late as 1:00 a.m, and they appreciated being released after they turned their pails in. It was also observed that volunteers became more flexible with their time—since they weren’t waiting until the wee hours after working a 4-hour shift, they signed on to work more shifts.

It’s a simple process to count the tokens. Before the festival, the buckets are weighed empty and then scales are zeroed out for the weight of the bucket. Then, if you put in one token, the scale shows one. Put 10 in, and it registers 10. Some booths had upwards of 4,000 tokens, so counting by weight is much more accurate than one by one with singles, fives or tens.

“We’ve convinced a lot of people time and again. We had tests where we’d put 100 tokens in and it would show 100 –even when it was off, it was reasonable, not glaring errors” Imwalle said.

Germania’s three major events account for nearly 75% of its annual budget and security concerns for Festival cash are a major consideration.

Weighing the tokens also prevents money from exchanging hands, preventing errors in counting as well as sticky fingers. With 40 booths selling food, goods, and beer, and 6-7 people in each booth per shift, there are a lot of people in contact with cash. Ten Oktoberfest beverage booths alone have more than 120,000 “ human touches” during the three day event.

With six figure cash totals floating around over the course of a few days, there’s a large chance of a few dollars going missing.

Tips from the Token Trade

One reason counting by weight is possible is that all the coins are the same denomination—each is $1. Other festivals have a $3 or a $5 coin, but Germania set the denomination at $1 to prevent customers from having to do coin math at the register.  This also means everything at Oktoberfest had to be priced in whole numbers—$2 instead of $1.50.

The three booths that sell the Tokens to patrons have a portable lock box for their cash. These cash boxes are transported under armed security to the Treasurer’s office.

Startup, setup, ready for the next one

A big advantage of the tokens was less need for cash at the startup of the day. Imwalle estimated they were able to cut the amount of cash in half. He still needed money to make change at the three token booths, but only three booths needed cash, as opposed to all 40 booths that sell food, beer, or merchandise. When volunteers came in for their shift, there wasn’t any startup money because it is all in tokens, there was no need to make change.

After a year of using the tokens at various sized festivals, the battle to gain acceptance from the membership has been won. It took some politicking though, as there were the usual skeptics that were less than pleased with the change at first and preconceived notions about the tokens ran deeper than the Hefeweizen. One criticism was that if the tokens didn’t work on Friday night, the Treasurer wouldn’t have enough time to go to the bank for startup money on Saturday and Sunday, since the banks close at noon on Saturday. Luckily, that wasn’t an issue because the token switch was so smooth.

After that first day selling tokens, the various booth chairpersons were asked to evaluate the token operation. There were no negative comments. It went so smoothly that Imwalle sarcastically jibbed, “I don’t know if this token thing is gonna work…next year we’re going back to cash!” The beverage chairperson replied that if they ever went back to cash, he’d come at Imwalle with a cleaver. Nothing has made his job easier.

It was an investment to begin the program, with a cost close to $20,000 for 300,000 tokens purchased from neighboring Osborne Coinage Company. That investment is a fixed asset, because The Germania Society can use the tokens forever until they wear out. Whereas tickets or cash get sticky and wet, the tokens look pristine—like they’ve never been used. Naturally, some tokens get lost or taken home by visitors, or even kept as souvenirs. But the vast majority of tokens that remain are currently in storage in all-weather cargo boxes, just waiting for the first light of spring for Maifest to begin.

For Germania Society, switching to tokens saved time and provided some peace of mind. Customers found the system easy to use, and plopping tokens down on a counter was much easier than digging through purses and wallets for exact change. At the end of the day, the buckets are weighed, the totals added up, and the tokens released for use the next day. Cash is only exchanged at three specific token booths as opposed to 40, preventing errors and sticky fingers. Even a little token change like this proves that time-honored traditions like Oktoberfest can still learn new tricks.

Four rules for making the switch to tokens:

1) The tokens must represent the same denomination—we set them all at $1.

2) You must have a booth to sell the tokens—we had three. The tokens were pre-packed in 10 or 20 in a plastic bag, and we never had a line.

2) The tokens for sale must be secured safely in the Tokens booth. We used special cash boxes secured by chains with lids to safeguard the cash.

3) You can’t let the tokens already sold for food or drink leak back into the festival elsewhere—tokens have to be treated as cash once they are spent. This is the purpose of the token catchers.

4) Purchase an amount of tokens comparable to the amount of cash handled during your busiest festival day.