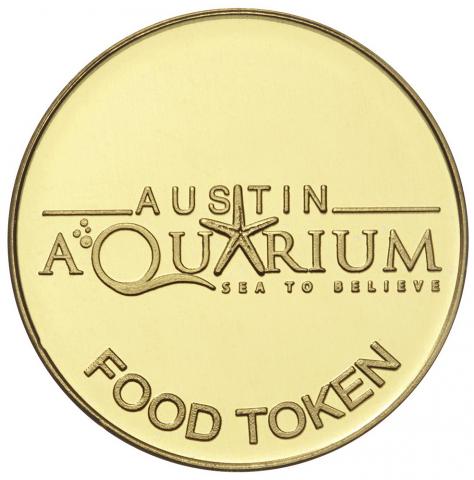 “Sea-ing” is Believing After a Token Change in Aquariums

(Austin, TX) - Exotic fish in coats of brilliant color; lorikeets chirping in the early morning; giant tortoises lumbering across the rocks, mulch and turf. Sounds like an island paradise, doesn’t it? How about the heart of Texas? With a wealth of exotic animals and educational programs for their guests, the San Antonio and Austin aquariums provide the experience of the oceans and rainforest right in the heart of the city. One of these aquariums’ flagship programs allows guests to purchase food to feed creatures such as koi, stingrays, sharks – anything that you can reach, you can feed.  However, what is surely a wonderful experience for guests often became a headache for employees. From dealing with cash-handling to spilled animal food, there were many problems in the early days. Fortunately, the use of tokens instead of cash for payment has paid dividends in ease of operations with increased convenience for the aquariums’ employees, and their customers as well.

The program is simple enough: Guests purchase the animals’ food at kiosks near the exhibits using Austin Aquarium tokens instead of cash, and then feed the animals. San Antonio has used tokens from its opening in December of 2014, borrowing on lessons learned from their sister facility in Austin which made the switch in the fall of 2014. Prior to that, since opening in December of 2013, customers purchased food for the animals they wished to feed by paying in cash at each designated feeding station.

“It was a madhouse,” says Taylor Columbus of the cash-based system. “We had a little cashbox and it would get left on the counter, or it would not have enough change in it…tokens are so much more convenient.”

Now, when customers walk through the front doors, they can buy tokens at the admissions station and use them at feeding kiosks throughout the aquarium. During the week, all Austin Aquarium tokens are bought at the front. On the weekends, a second cash register is used in the back of the aquarium to avoid backup in lines for admissions, tokens, and the gift shop. This not only streamlines the customers’ experience, but the aquarium’s operations as well. “This way we don’t have to have individual stations handling cash, and since tokens are sold up front the same person handling admissions can also sell tokens,” said Columbus.

The amount of cash changing hands throughout the aquarium is reduced, adding an extra level of security and reducing the number of paid employees needed to keep the feeding system running smoothly. Fewer employees dealing with money also allows for more staff to serve customers in other ways, and frees the staff to maintain the facilities and care for the animals.

A “Mess” No Longer

Aside from eliminating the confusion of multiple stations accepting cash, using Austin Aquarium tokens actually makes the entire process cleaner for the facilities. Instead of having to worry about people carrying the food throughout the entire aquarium after purchasing it at the entrance (as used to be the case), having payment at the front and dispensing of food take place near the exhibits keeps unnecessary messes from occurring.

“It’s convenient for us but also for guests; they don’t have to carry around an entire cup of food,” said Columbus.

This system also makes caring for the animals’ health and wellbeing easier for the employees. Care for their animals is a prime concern of any aquarium, but a program where guests can feed the animals can easily go wrong. “Sometimes people don’t know what food goes with what type of animal.” Columbus says. With tokens, employees at each station can make sure the correct food is being given to its intended animals. Instead of leaving it up to the customers to make sure the animals are properly fed, the token stations allow knowledgeable employees to make sure that the intended creatures are getting their fill of safe, healthy food.

In San Antonio, the system works a bit differently than in Austin. At 55,000 square feet, the San Antonio aquarium is more than double the size of Austin’s. San Antonio offers more locations throughout their facility to purchase tokens, including a separate area of the aquarium specifically for customers to purchase the animals’ food. “Tokens are always available at the front, but are also available at the food booth and at concessions,” says Jennifer Albrecht.   Now, you may be wondering; why sell them at concessions? In fact San Antonio’s tokens not only work for feeding the animals, but for feeding customers as well!

Sometimes at the end of the day the animals and patrons visiting them may need a break.  So the Aquarium accepts tokens at the concession stands, allowing hungry patrons to feed themselves after a full day of feeding the animals.  This eliminates the hassles of getting a refund for unused tokens – which can also be used on a future visit.

While tokens have been used for feeding the animals since the aquarium’s opening, the concession concept was implemented much more recently. “Patrons seem to like the tokens,” says Albrecht.  Perhaps that is due to the simplicity – since a single token replaces three dollar bills, it is easier to handle.  “They can use them to purchase two items priced at $1.50 each, such as water, drinks, chips or cookies, or a single $3 item like a hot dog.”

Price is of No Issue

The tokens, priced at $3 individually in both Austin and San Antonio, work just like cash at the food dispensary stations near the exhibits and, in San Antonio’s case, at concessions as well. “For most animals, it is the same price to feed everything,” says Columbus, “and they give them (the customers) the correct type of food at the stations so they don’t have to decide up front.”

Recently live food options were added to feed to the stingrays, octopus and caimen.  While these are 3 tokens, everything else is a single token.

Setting each animal’s food at a standard price makes the tokens easy to use. Instead of dealing with loose change from paying with cash, customers can pay a flat dollar amount and the aquarium has less money to organize. Another benefit of the standard pricing is that both aquariums offer discounts when tokens are bought in bulk, the most popular being the 10 for $20 deal.

Albrecht sees this as a positive sign not only for San Antonio’s business, but also for the use of tokens as a whole. “A lot of members will buy them at quantity discount; we’ve had a lot of output and less input so we know that they are hoarding them a bit at home until they come back for their visit.” That’s the beauty of purchasing in bulk. The tokens never lose their value and can be used on subsequent visits, sometimes convincing customers to make another trip to the aquarium so as to not let their tokens go to waste. Customers’ tendency to save tokens reduces the headache of offering refunds and also adds a measure of profit for the aquariums.

Marketing is a prime concern for many attractions like aquariums, and tokens provide some unique opportunities in this regard.  Recall that customers are rewarded with better pricing for volume purchases.  And since the tokens can be used whenever customers visit the aquarium, some will invariably go home with patrons.  Each of the aquariums has their tokens minted with their logo on one side – an iconic design with a starfish used as the “A” in “aquarium” and their tagline, “Sea to Believe,” minted beneath the logo. Whenever customers see these tokens, whether on their bureau at home, on a desk at work, or with their pocket change, they recognize the logo and fondly recall the memorable experience they had feeding the animals at the aquarium.

While tokens work quite well as advertising, serving as “mini billboards” each time they are seen, they can also serve as souvenirs in their own right.  At $3 (or less when purchased in larger volumes) tokens can serve as an inexpensive reminder of their day at the aquarium.  While the incidents of this are not huge, they are profitable, as tokens have a landed cost less than 50-cents each, but sell for $2 or more.  For each token sold but not redeemed, that’s a net profit of $1.50 (or more) per occurrence.

Moving Into the Future

One of the prime focuses for aquariums, aside from making sure their animals are taken care of in the best ways possible, is education. In San Antonio and Austin, the ease of using tokens has allowed more time and energy to be focused on teaching their customers about the unique and exotic animals of the seas. San Antonio has many outreach programs where aquarium employees take animals to local schools for presentations, but also holds many educational sessions right on the main aquarium floor. The token feeding program is an extension of this important facet of the aquarium’s existence, and allows customers not only to get up close and personal with the animals but to help care for them and make a direct connection with the creatures. This is an experience that gives children an insight into the natural world on a hands-on level. The ease of using tokens, both for the customers and the employees of the aquarium has allowed both the San Antonio and Austin aquariums to provide more opportunities for children and adults alike to learn more about the creatures that call our oceans home and devote fewer employees to handling money and more to handling their creatures.

Overall, the use of tokens has been well received from management and customers alike. What began as a way to simplify feeding the animals has stretched its use into areas such as concessions and souvenirs, as well as marketing and branding.

TokensDirect is a division of Osborne Coinage Co., America’s oldest private mint.   Stock and custom tokens are available to suit any need. Orders for stock tokens can now be placed at a secure online store, www.tokensdirectstore.com, to ship the next business day. To speak with a Sales Specialist, contact TokensDirect at (866) 274-0868, or via mail to TokensDirect, 2851 Massachusetts Avenue, Cincinnati, OH  45225, or via e-mail at ask@tokensdirect.com.