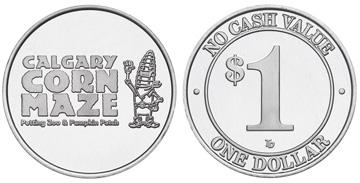 Are Tokens the Ticket to Successful Corn Maze Operations?

– When you are in an industry with a short season, it is imperative that everything to run smoothly.  Corn mazes certainly fit into the “condensed season” category and often are busiest on the weekends – when more than half of their business is transacted.  So these seasonal venues are increasingly turning to tokens rather than cash as a means to simplify their operations, and improve cash control while presenting a more professional image.  As they have found, there are more than mere token benefits from making the switch.

Tokens are typically sold only at the main entrance where customers pay for admittance – so cash control is heightened.  Naturally this location is staffed by an owner or trusted employee - thus eliminating accounting errors and employee theft.  The tokens are then used to pay for corn cannons, barrel trains, jumping pillows and other stations around the venue.  Employees accept the tokens and then turn them in at the end of the day.

Visitors to the Calgary Corn Maze pay for admission to the 10-acre corn maze or the smaller 3-acre version along with admission to the petting zoo as they enter the facility.  Here they also have the opportunity to purchase tokens for use at other stations.

Mark Muchka of Calgary Corn Maze adds “the whole purpose of tokens is to take cash out of your staffs hands.  At the end of the day we can track it and know how many people visited each station.”

In addition to reducing accounting errors and eliminating the potential for employee theft, knowledge of how the stations are performing allow Muchka to make better decisions on the locations and types of stations to include.  The tokens, which he purchased from Cincinnati’s Osborne Coinage, also present a more professional image than the tickets which Calgary Corn Maze has used in previous seasons.

“The tickets fall out of people’s pockets, they get lost, folded, bent” says Muchka.  And if they should travel home with the customer, there was nothing on the generic tickets of any marketing value – nothing to remind customers of their visit to the maze.  His tokens, on the other hand, are minted with their name and logo which increases their “souvenir value.”   They are likely to evoke memories of their time in the maze, or on the jumping pillows, or sluicing for gems, or maybe being jostled on the tractor-pulled wagon ride.  Whatever takeaway memory the token brings to mind when it is viewed with their pocket change is well worth the small cost of the token itself.

“We put our name and logo on the tokens – and we get a lot of comments on them” he says.  It is doubtful that anyone is likely to comment on a paper ticket, at least not from a marketing and memorability standpoint.   Given the durability of tokens, they can be used season after season – so these marketing benefits will be experienced time and again from a single investment.

Another marketing point that Muchka appreciates is that since tokens are sold along with admission, customers are only dipping into their wallet once.

“If you are forcing customers to open their wallet multiple times during a visit, they can start to feel nickel-and-dimed” mused Muchka.

Recall that since owners or trusted employees are manning the admissions area, they can suggestively sell tokens as well.  While he has not yet used the tokens in mailings or outbound promotions, that is another marketing option that is available.

After just a single season, Muchka and his crew at the Calgary Corn Maze are sold on the benefits of token-based operations. The professional atmosphere, increased cash control, elimination of accounting errors and employee theft, improved marketing, and increased souvenir value are clearly more than token benefits.