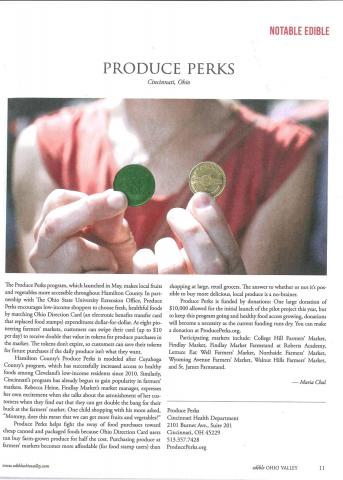 The Produce Perks program, which launched in May, makes local fruits and vegetables more accessible throughout Hamilton County. In partnership with The Ohio State University Extension Office, Produce Perks encourages low-income shoppers to choose fresh, healthful foods by matching Ohio Direction Card (an electronic benefits transfer card that replaced food stamps) expenditures dollar-for-dollar. At eight pioneering farmers’ markets, customers can swipe their card (up to $10 per day) to receive double that value in tokens for produce purchases in the market. The tokens don’t expire, so customers can save their tokens for future purchases if the daily produce isn’t what they want.

Hamilton County’s Produce Perks is modeled after Cuyahoga County’s program, which has successfully increased access to healthy foods among Cleveland’s low-income residents since 2010. Similarly, Cincinnati’s program has already begun to gain popularity in farmers’ markets. Rebecca Heine, Findlay Market’s market manager, expresses her own excitement when she talks about the astonishment of her customers when they find out that they can get double the bang for their buck at the farmers’ market. One child shopping with his mom asked, “Mommy, does this mean that we can get more fruits and vegetables?”

Produce Perks helps fight the sway of food purchases toward cheap canned and packaged foods because Ohio Direction Card users can buy farm-grown produce for half the cost. Purchasing produce at farmers’ markets becomes more affordable (for food stamp users) than shopping at large, retail grocers. The answer to whether or not it’s possible to buy more delicious, local produce is a no-brainer.

Produce Perks is funded by donations: One large donation of $10,000 allowed for the initial launch of the pilot project this year, but to keep this program going and healthy food access growing, donations will become a necessity as the current funding runs dry. You can make a donation at ProducePerks.org.