How to Increase On-Premise Gaming Revenue with Tokens 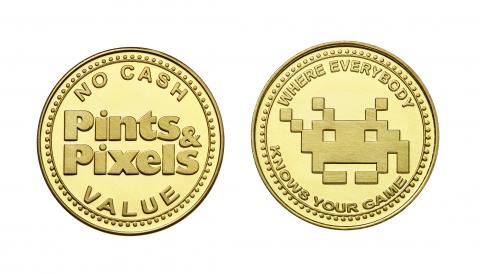 Stepping into Pints & Pixels is like stepping back in time—you’re greeted by the familiar whizzes, dings, whirls, pops and bright colorful lights from over 50 classic arcade games. The Huntsville, Alabama establishment is part arcade, part restaurant and bar—capitalizing on nostalgia by transporting customers back to the good ol’ days of their childhood, when a pocket full of quarters could put off homework for a few more hours while you helped PacMan gobble up ghosts. Now those children are old enough to have a beer between games, and the pocket full of quarters has been replaced by custom bar tokens.

You couldn’t tell from the sound, but instead of quarters clanking into machines, it’s custom tokens that keep these high scores scoring. Co-owner Sherry Wallace likes that the tokens provide a retro experience for gamers while simultaneously being easy and safe to operate. Pints & Pixels officially opened April 9th, but given how busy the soft opening has been—and how well the tokens are already operating— it’s a sure bet that Wallace is in for a busy spring.

LEVEL 1: How to Play the Game

Co-owner Richard Moss explained that the idea for Pints & Pixels came from a business trip to Portland, Oregon where he and his coworkers fell in love with a new concept bar called Ground Kontrol, an arcade for adults that served food and beer— along with a side of nostalgia.  As “barcades” began popping up across the country, appealing to every age and demographic, he decided to bring the concept to Huntsville.

The games at Ground Kontrol use quarters, but Moss and Wallace thought they could improve on the idea by using tokens. They knew they didn’t want the arcade to be “free play,” where the customers would pay an entry fee and play for free.

“Inserting coins is part of the arcade experience. When you hear that coin rattle its way through the validation mechanisms and clunk into the cash box, that's a sign you're about to have some FUN!” said Moss.

Plus, he feels having that small investment in a game makes gamers try harder and care more. If you don't do well on your first "life" in a game that is on free play, maybe you just walk away; if you've put a token in there, you want to get everything you can from it.

And that’s not even to mention continuation games like Gauntlet, or Teenage Mutant Ninja Turtles, which allow for continued play with additional coins. There's a challenge in trying to go as far as you can for each coin, or to beat the game on as few coins as you can. All that goes away when you can just press a button to keep going.

With that decision firmly made, Moss began researching custom coin mints. He found Osborne Coinage, in Cincinnati, Ohio and asked for a quote. He knew he wanted the token to feature the P&P logo, a pixilated Space Invaders alien with their motto “Where Everybody Knows Your Game.” The other side reminds customers the title of the barcade and that the coin has “No Cash Value.” Osborne’s design teams quickly went to work, and sent back a mock up and price quote.

“They have been so accommodating and easy to work with. I’ve encountered the opposite of that in many of the businesses that we’ve dealt with, so Osborne was refreshingly delightful to work with,” Wallace said.

Meanwhile, Moss went to an auction and bought two coin change machines made by American Changer of Fort Lauderdale, Florida. Because the custom tokens are about the size of a quarter, no changes were necessary to the machines.

All that was left was to set the price: one token for video games, three for most pinball machines. Because the tokens are an internal system, and only redeemable inside the arcade, Wallace won’t need to reorder them regularly. They’ll stay nice and clean, and unlike paper tickets, won’t get soggy or jam the machines if they get wet.

As they were deciding on pricing, Wallace and Moss realized that using tokens opened up an endless variety of promotional options. That “No Cash Value” reminder on the back of the token means that Wallace and Moss could give away tokens as they see fit.

First they decided to reward buying bulk tokens with bonus tokens: one dollar in the machine yields 4 tokens, $5 gets 24 and it goes up by four tokens with each denomination.

The next opportunity was right under their noses—in addition to their 50 arcade and pinball games, P&P seats 100 with a full service restaurant and bar with 20 craft beers on tap. Each beverage purchase is rewarded with one bonus token, and food purchases with two tokens. Finally, they decided to award private parties with 100 tokens for every hour booked. Additional sets of 100 tokens then are offered for $20.

The token machines took some adjusting to offer the bonus tokens, but Wallace and Moss found that for the most part these promotional offers ran themselves.

“No Cash Value” means Wallace and Moss can give tokens away—but it also means that nobody breaks in to take them either. Using tokens instead of coins inherently turns away thieves and vandals, who often target change machines for a quick and easy hit. And, because machines are dealing with the exchanges, no employees are handling currency, so there are no accounting errors or quarters mysteriously walking away at the end of a shift.

It’s too soon to tell for Pints & Pixels, but another way tokens add value is “walkaways”—when customers take the tokens home instead of using them. Tokens with the P&P brand on them end up in pockets, cup holders, change drawers, etc., act as a mini billboard, beckoning for a return trip. Since P&P charges a quarter for each token, which have a landed cost of less than 20 cents, each walkaway nets a nickel—small value that adds up over time.

Joystick in Hand and a Pocket Full of Tokens

According to Wallace, customers have raved about the tokens—their ease of use, their value to cost ratio, and that little pixilated alien. Wallace and Moss rave about the ease of installation and use of the tokens, and their cost to value ratio—the tokens are actually paying for themselves. For Richard Moss, there’s nothing like the feeling of putting the token in the game, hearing it clunk in, and knowing you’ve invested something into that game.

“It makes it more fun, makes you care about how well you play, and that’s part of the experience we wanted to give our customers,” he said.

Putting a token into a game is a small investment that pays off in big fun. Running an arcade on tokens is a big investment that pays off in ease of use, value, and security. That is, as long as the customers don’t try to use them to pay the parking meter outside. Pints & Pixels is still working out the kinks before their April 9th opening, but the tokens are rattling, keeping PacMan chomping, and Sherry Wallace happy as a Teenage Mutant Ninja Turtle with a slice of pizza.