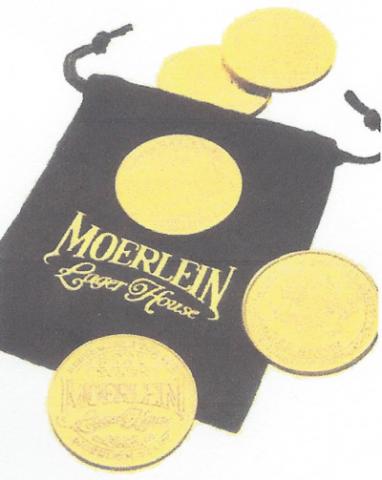 Cincinnati, OH – Greg Hardman, who revived the longtime Cincinnati beer brand Christian Moerlein in 2004, is now reintroducing another local brewing tradition – beer tokens - with the help of another Cincinnati company – Osborne Coinage Company. The tokens mark a return to a Moerlein tradition that dates back to the 1800’s when the company produced beer tokens which could be redeemed for a Moerlein beer in Over-the-Rhine saloons which carried it. The new tokens are redeemable for one draft beer at the soon-to-open Moerlein Lager House – a restaurant and brewery located in Cincinnati’s Smale Riverfront Park, overlooking the picturesque Ohio River and Great American Ballpark.

The custom beer tokens include the Moerlein Lager House logo on one side, and the crowned Moerlein corporate logo on the other, signifying the many awards that the beer has won in taste-testing competitions around the world. Five tokens are packaged together in a felt pouch adorned with the Moerlein logo for a cost of $25. They are available at the Moerlein Lager House and online at www.moerleinlagerhouse.com. So far sales have been rather brisk, owing to the unique nature of the product and the collectible nature of the tokens.

“We’re delighted to bring back this tradition” said Hardman, CEO of the Christian Moerlein Brewing Company. “Now people can give out beer tokens to their friends, colleagues and business associates – just like they did over a hundred years ago.”

Hardman, who has resurrected more than 60 beer brands original to the Cincinnati area, was considering reviving tokens when he received a Christian Moerlein beer token from 1881. “That sealed the decision” recalls Hardman who contacted Cincinnati’s Osborne Coinage Company to begin the process.

That authentic beer token which prompted Hardman to act on his initial instincts is now displayed along with other historic memorabilia in the multi-million dollar Moerlein Lager House. Hardman plans to open the “Beer Barons Hall of Fame” on the site as well. Future token designs will pay tribute to inductees – heightening the collectable nature of the tokens. For now though, Hardman is thrilled with the excitement he’s brewing as he re-introduces the lost tradition of beer tokens.