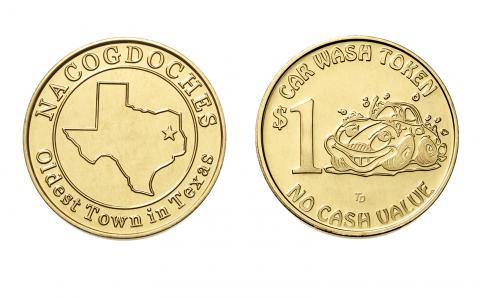 Cincinnati, OH – Steve Bartlett, owner of several “My Car Wash” self-service car washes, found himself in one of the worst imaginable spots for a business owner when he walked onto the lot to find his quarter vaults had been emptied.  Entirely.    After the break-in, Bartlett decided to switch from quarter-based operations to a token-based system for his Nacogdoches, TX facilities.  Now, tokens are providing more than just peace of mind – they are providing thousands of dollars in extra cash annually.

Bartlett operates a pair of self-serve washes with a total of thirteen bays. Until recently all were coin-operated laundry operations. On the surface, everything seemed to be running smoothly, but about a year ago he noticed that something wasn’t adding up in the financial records.

“We noticed that our revenue stream had decreased 15-20% some months and maybe 5% other months,” Bartlett said, initially writing off the odd shifts to economic fluctuations. “Oddly enough, we were actually getting quarters stolen over about a one year timeframe.”  The culprit was found to be a former employee of the Star Vault Company, which supplies the storage vaults that many small town car washes between Dallas and Houston use to keep their cash assets safe.  Eventually the thief was caught, but not before a final hit wherein he completely cleared out every vault and left it barren.  After such a large financial blow, Bartlett knew changes needed to be made.

About a year ago, both My Car Wash locations made the switch from quarters to tokens.  Since then, it has been rosy for the company. “We’re absolutely delighted.” Bartlett says of the transition.  Initial fears of a complicated process of implementing the new technology in place of the old were quickly laid to rest by how smooth the process was.  “As it happened, we just retrofitted our existing changers to dispense tokens instead of quarters; it was an extremely cost effective changeover.” he says of the switch.  Most machines that count quarters are also able to count and sort coins of various sizes, and with basic calibration can easily accommodate tokens in place of or in addition to legal tender.

At the same time that Bartlett was switching from coin-operated laundry operations to tokens, he also added in-bay credit card acceptance at each wash.  He figures that he “spent about $10,000 per wash to add both credit card acceptance and the complete mechanical conversion to take tokens.”   Since he supplied all of the labor that figure was an equipment only cost – so wash operators who want to outsource the installation can plan to spend a bit more.  He figures that the tokens portion “was probably $3 - $4000 total.”

Smoother Operations are Another “Token” Benefit

Instead of paying for a car wash with quarters, car wash bays now take the tokens for payment.  With the price for each token set at $1 and car wash services selling in $1 increments (i.e. increments of one token) as opposed to quarter increments, there are fewer complications in payment from the customers’ end as well as an overall increase in revenue due to how timed washes are rounded up to the nearest dollar.  Selling at such a convenient price and volume also allows for more promotional flexibility (i.e. selling 11 tokens for $10, improving customer satisfaction as well as the likelihood of return).

Furthermore, with roughly ¼ the volume of coins to work with on a day-to-day basis, operation of the company’s facilities has become much simpler and less involved thanks to the switchover.  Due to their relative accessibility as well as minimal confusion on consumers’ end in using the tokens, both wash facilities have been selling tokens at an extremely high rate.

“We made an order of 10,000 tokens to start with for both locations,” Bartlett says, “within 4 months we ordered another 5,000 and another 4 months later we ordered 5,000 more…we’re buying them for 15 cents each and selling them for a dollar.”  Considering the buying and selling price for the tokens, the initial order alone provided Bartlett with $8,500 worth of profit – or nearly enough to pay for the entire switchover (equipment-wise) within a year just on token profit. Clearly the switchover to tokens has given Bartlett a great boost in its profit margin, an especially good turnout for a shift in operations brought about by theft.

Tokens also lend themselves to promotional and PR type uses.  “We find it better to give refunds for problems to our customers using tokens which will ultimately return to our wash,” said Bartlett.  “This is far superior to a cash refund which may well be spent elsewhere.  We can also use tokens as give-a-ways to friends and frequent return customers.  I often walk around the washes and thank our customers for coming and give them a token or two. I would not be so generous with cash.”

A Little History Goes A Long Way Toward Increasing Profits

Nacogdoches is the oldest town in Texas, founded near the eastern edge of the state in 1779. Rather than using custom tokens for branding purposes as many car washes do, Bartlett decided to put a unique spin on his tokens.  “We did it as historical local flavor rather than for branding.” he says.  One side of the tokens features an image of Texas with a star marking the location of the town and includes the words “Nacogdoches – Oldest Town in Texas”.

In a small city of about 36,000 people there is little worry about intermixture of tokens with other businesses that use them, so putting a creative spin on the tokens’ customization is a unique option that just so happened to increase sales of the tokens themselves. They are a unique souvenir for tourists, allowing them to own a piece of the town and state’s history that can’t be bought anywhere else.  It is not just tourists that have purchased the coins for their unique value, though. While most of the tokens are used for their designed purpose, Bartlett has also sold quite a few as collector pieces, only adding to the positive token turnover rate.   “We actually had a couple collectors stop by and purchase brand new tokens to take to a coin show,” Bartlett recounts.

Despite the unique nature of these tokens, walkaways are not a phenomenon that is isolated to Nacogdoches.  Whether tokens are unique – including the car wash name and logo, or just generic – customers tend to buy more of them than they’ll need, especially at first.  This is partly because customers are unsure how many tokens are required to clean their chariot – and they know that unused tokens can be brought back next time.  Many of these leftovers make their way into change holders in the car, the bureau top at home, a desk at work, or somewhere else – and stay there.  Rewarding customers for bulk purchases (selling 11 $1 tokens for $10 etc.) and accepting tokens everywhere on site including vacuums and vending machines as well as self-serve bays, may increase the walkaway effect.

Although they are using standard brass tokens of a common size, Bartlett was not terribly worried about “crossover” – or accepting competitive tokens.  This can be a real problem when your wash is located near an arcade or laundromat that is token based, and is especially problematic if your tokens are valued at $1 while the competitors are worth a quarter.  Elimination of crossover is easily accomplished with a token size that is different from the quarter-valued tokens used elsewhere.  For highly-security conscious car wash owners, bi-metal tokens with a unique electromagnetic signature are available, as are high-security, limited geographic availability tokens.

The theft at Bartlett’s car washes was unique in its manner, but theft is fairly common at cash-intensive establishments like car washes and laundromats.  Self-serve facilities are even more of a target.  Bartlett was lucky in one sense – his heist did not involve vandalism of the machinery during the theft, which can often be more expensive than the value of the coins taken.  Stringing victims, though they are spared the vandalism as well, are quick to agree that had their coin boxes been filled with tokens rather than quarters they would not be targets for thieves looking for quick cash.

Overall, Bartlett has been pleased with the switchover from quarters to tokens. “They have been a true success story for us in a time when our revenues probably would have decreased.”  With the departure of the oil and gas industries in the area, many businesses are hurting for revenue.  Despite this, these car washes have come out well, thanks in no small part to the tokens.  With thin margin businesses such as car washes in small towns, what may be a relatively small drop in revenue to larger groups can sometimes mean the difference between being in the red or the black.

“I suspect our revenue stream would have been 15% lower had it not been for tokens,” Bartlett says, “so staying level in a generally down economy is great.” tokens have provided Bartlett with not only an efficient and profitable economic tool, but also a unique product that celebrates his town’s history.  In the end, tokens have allowed these small community car washes to succeed not only as a business, but also as a part of the preservation of Nacogdoches’ cultural identity.

TokensDirect is a division of Osborne Coinage Co., America’s oldest private mint.   Stock and custom tokens are available to suit any need. Orders for stock tokens can now be placed at a secure online store, www.tokensdirectstore.com, to ship the next business day. To speak with a Sales Specialist, contact TokensDirect at (866) 274-0868, or via mail to TokensDirect, 2851 Massachusetts Avenue, Cincinnati, OH  45225, or via e-mail at ask@tokensdirect.com.