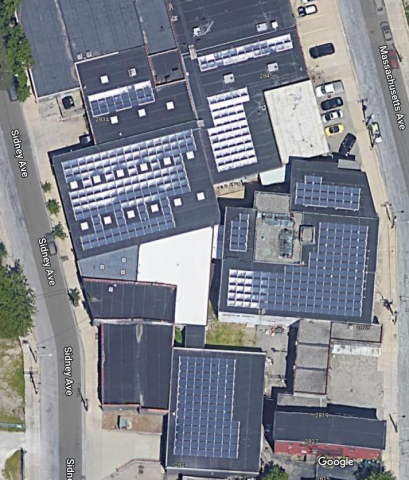 Three guesses on what you see in this photo. If you guessed the oldest private mint in America is primarily powered with renewable/solar energy, you win!

In celebration of Earth Day, here’s how TokensDirect (a subsidiary of Osborne Coinage) and  has been making their little block just north of downtown Cincinnati better for the planet..

In 2009 the owners of TokensDirect decided to look into how putting a single solar array on the factory roof could reduce our dependence on electricity produced from natural gas and coal AND help the planet at the same time.

Based on their research, they decided to go ahead, but start small. The first solar panel system covered just one section of the factory, but as it continued to generate positive returns, the installation was expanded two more times to cover almost the entire production facility roof, as you can see from the satellite photo below.

The final system contains 148 solar panels and six inverters with a rated capacity of 156 kilowatts. The approximate electricity production is 1,900,000-kilowatt hours and still going strong!