Can you spare me a dime? …Or a quarter? 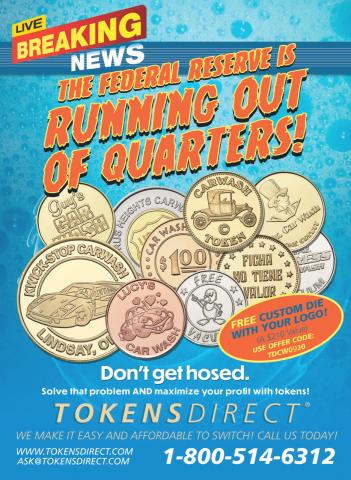 It seemed to start out as your basic viral rumor: That a coin shortage was happening across the United States. Then a few signs started appearing on storefronts. And then, for the real clear-cut announcement — thanks to the super sleuth and rumor-squashing machine, Snopes.com —it was made very clear that it was actually true. Pennies and quarters were disappearing, and a nationwide shortage was unavoidable.

On June 11, 2020, the U.S. Federal Reserve released the following statement: “The COVID‐19 pandemic has significantly disrupted the supply chain and normal circulation patterns for U.S. coin. In the past few months, coin deposits from depository institutions to the Federal Reserve have declined significantly and the U.S. Mint’s production of coin also decreased due to measures put in place to protect its employees. Federal Reserve coin orders

from depository institutions have begun to increase as regions reopen, resulting in the Federal Reserve’s coin inventory being reduced to below normal levels.… The Federal Reserve is working on several fronts to mitigate the effects of low coin inventories. This includes managing the allocation of existing Fed inventories, working with theMint, as issuing authority, to minimize coin supply constraints and maximize coin production

capacity, and encouraging depository institutions to order only the coin they need to meet near‐term customer demand.”

On July 23, 2020, the U.S. Mint updated the public on the state of coinage affairs and encouraged the public to use coins as much as possible for purchases: “We are asking for your help in improving this coin supply issue…You can do so by paying for things with exact change and by returning spare change to circulation. Until coin circulation patterns return to normal, it may be more difficult for retailers and small businesses to accept cash payments. For millions of Americans, cash is the only form of payment and cash transactions rely on coins to make change. We ask that the American public start spending theircoins, depositing them, or exchanging them for currency at financial institutions or taking them to a coin redemption kiosk. The coin supply problem can be solved with each of us doing our part.”

How are car wash owners handling this change in change availability?

Bruce Yeoman, who owns three coin-operated Car Wash Inn locations in and around the Cincinnati, Ohio, area told Cincinnati Public Radio, “Our business is run on quarters and with the coin shortage banks don’t have the quarters to replenish. He added that banks tell him their supplies vary week to week. The July 10 news story said that Yeoman is turning to friends and social media for help. “Everybody has a coin jar at home,” he says. “I’ve asked (friends and

family) to see what they have, and I’ve been driving around from house to house giving them cash for their quarters.” Yeoman said in the story that he’s getting by thanks to that generosity, but he estimates it’s only making up about 5% of what he would normally use in a given week.

There have been threads on carwashforum.com about the coin shortage. A post by Keith Baker states, “I’ve been “salting” my dollar coin changer with my 1-dollar tokens. About 5 to 10 per cent. It seems to have slowed down my walk off of coins some. If someone just stops by just to get coins, then I either get some payment for my service or I make a customer out of them. I’ve posted the policy on the changer and had no complaints about it.”

A lot of forum users suggested converting to tokens only or only giving out $1 coins as change. Another suggestion was to put a sign saying that the change dispensed was for paying customers only.

As for what’s to come of the shortage, the Federal Reserve said not to worry. “Since mid-June, the U.S. Mint has been operating at full production capacity, minting almost 1.6 billion coins in June and is on track to mint 1.65 billion coins per month for the remainder of the year… As themeconomy recovers and businesses reopen, more coins will flow back into retail and bankingchannels and eventually into the Federal Reserve, which should allow for the rebuilding of coin inventories.”

Reprinted with permission of Self Service Car Wash News