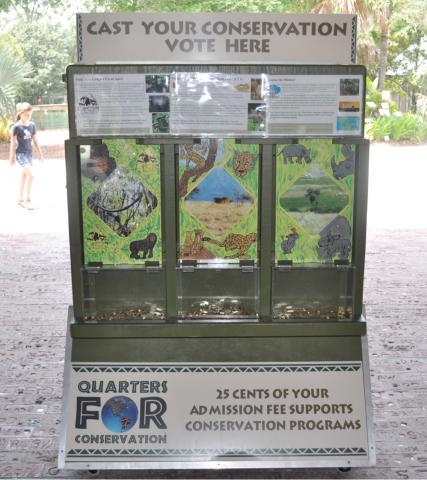 Brevard Zoo was a participant in the “Quarters for Conservation” project, where 25-cents from each admission funds a conservation project.  Since its inception on January 1, 2011 the program has generated $38,546 which has helped to fund 9 conservation projects.  But in addition to the money raised, the program is helping to educate visitors about conservation and how they can help.  Clearly those are more than token results.

The idea came from other American Zoological Association member zoos.

“There are more than a dozen AZA zoos participating in Quarters for Conservation” said Brevard Zoo Conservation Coordinator Tracy Frampton.  “And that figure continues to grow.  Each zoo handles the program as they see fit.  We really like the idea of educating visitors about the many projects that we undertake.  Engaging and empowering them – letting visitors know that their vote really counts – that is also important to us.”

To engage and empower zoo patrons, each visitor is given a brass token as they enter the turnstiles.  Each token represents a quarter – that portion of their admission which goes directly to fund conservation projects.  Shortly beyond the turnstiles visitors encounter three collection units complete with graphics which detail a particular project.   Since the tokens are essentially a vote for a particular project, the Quarters for Conservation program is an interactive approach which draws visitors in to the zoos conservation programs and priorities.

“Many of our visitors live around here so they are amazed at the local projects that we get involved with” said Frampton.

Every three months, three new projects are introduced and the three that were just included are funded as the voting dictates.  Among the projects that have benefitted from the program include a butterfly garden built on the grounds, as well as purchasing tools used for butterfly surveys.  They’ve also undertaken projects with dolphins, right whales, hornbills, cheetah, rhinos and coral.  Brevard Zoo is heavily involved with oyster reef restorations and mangrove projects which have both been funded by the program.

“Mangroves are very important to habitats in the Indian River lagoon” states Frampton.  “One of our projects is a mangrove restoration and headstarting program” she continues.  “Here we help grow the mangroves, then we turn them over to the DEP but we also help to plant them.”

Another project restores oyster reefs by creating mats using oyster shells and deploying them in the Indian River Lagoon.  The young oysters think they found a great place to settle and begin a new reef within a few months.

The program has been very successful in raising awareness and funding of the various projects.  Frampton opted for a standard design on the second batch of 10,000 tokens which were ordered from a company she found online – Cincinnati’s TokensDirect.  Ordering a standard design helped to shorten the lead-time and speeding the tokens to the collection bins.

Given all of the advantages – awareness, education, engaging of visitors, and vital funding of conservation projects, it is clear that Brevard Zoo has achieved more than token results from their “Quarters for Conservation” program.