Tokens are King for One Carwash Owner 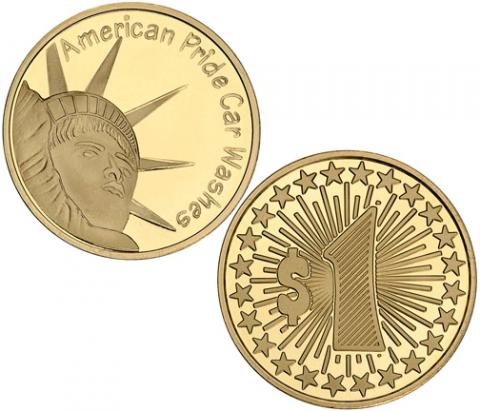 Cincinnati, OH – Remember going to your first scary movie as a kid?  Maybe you were still a bit frightened when you went to bed – so every sound freaked you out – especially in the dark! But when you turned the light on, those scary sounds weren’t so bad anymore. Often fear of the unknown is worse than the unknown itself. Car wash owners may feel this way about changing things around in their operations – especially big things like how customers pay for their washes! But as this operators found – switching from cash to tokens wasn’t difficult – and it has been profitable.

This operator braved the unknown – switching from cash-based operations – to token-based car washes – and is now reaping the benefits. Clearly there were many unknowns. What will I have to change? How much will it cost me? How long will it take? What if my customers hate tokens and never come back? As it turns out when these operators “turned the light on” and learned what was involved – the process wasn’t so scary. And yes, their customers are still coming back – stronger than ever!

Brian Costa operates five American Pride car washes in the Cleveland area. Some locations have been around since 1985 – the newest one was built in 2008. All told, there are 29 self-service bays and 6 touchless automatics. Until early 2000 each location was quarter-based. Then, when the dollar coin came onto the scene, Costa switched over to that – figuring that a couple dollar coins were easier for his customers to handle than a whole fistful of quarters.

But while the dollar coins may have been easier to handle, getting the dollars was no easy task.

“You could spend dollar coins anywhere, but you rarely get them back as change” recalls Costa. “So they were a bit of a novelty. Some customers would buy extras to give to the grandkids or to keep.”

That was back when the only dollar coin was the Sacajawea dollar – with today’s presidential dollar coins, the novelty factor would likely be worse.

While Costa was not averse to having unique mementos for the grandkids, putting additional dollar coins into circulation was not helping Costa with his car wash operations. The changers were often running out of dollar coins – which meant more trips to the bank – and more time spent on fewer washes sold.

Finally, after struggling with having an inadequate supply of dollar coins for 4 years he finally made the switch to dollar tokens.

“We went with a token that was just larger than a Sacajawea dollar” recalls Costa, “we wanted a token that would be memorable and play up our name – American Pride.”

So he got 1.073” high security CTX® tokens from Van Brook of Lexington featuring the Statue of Liberty on one side and the value on the other. While these are certainly memorable and serve a valuable marketing purpose each time they are seen with pocket change – the larger size posed some issues.

“The biggest challenge was the coin slots for our vacuum face plates and so forth” recalls Costa “the slot was not big enough – and neither were our Parker slug buster units. The chutes inside the coin mechanism were not large enough either. So these required a lot of filing with a hacksaw blade or a Dremmel to modify them.”

“I worked on the conversion at each location a little bit here and a little bit there, but if I were to add it all up, it was probably a good week of time for the four places,” he recalls, “Figuring out how to file, grind and cut the vacuum coin drop faces and Slugbuster acceptors took the longest. I certainly didn’t want to ruin anything and I had to do it in a way that didn’t make the equipment look compromised.”

In addition to the physical modifications to the equipment, Costa says he also “replaced a few acceptors.”

But since he replaced very little equipment and did the work himself, Costa was able to keep the changeover costs low. He figures that each location of four locations was less than $1500 each (not including tokens) – with the fifth designed for token acceptance from the start. He says “payback has been in the form of security and peace of mind.”

All of their coin acceptors – whether on the vacuums, in the self-serve bays, for the Fragramatic air fresheners, for dry foam shampoo, the touchless automatics, even the vending machines - will accept quarters, tokens and dollar coins – providing customers with plenty of flexibility.

“Once we made the modifications, we came in one day, took out the dollar coins, and replaced them with dollar tokens and away we went. We also had new decals made for our Rowe changers that showed the new token.”

Like any of us, Costa was worried about customer acceptance and whether this was the right move for his American Pride car washes.

“I’m not sure that a lot of customers realized that they are tokens when they first got them” he recalls. “They are the same color as Sac dollars which we’d been using for 4 or 5 years. But honestly I wouldn’t say that we’ve had a whole lot of complaints. I worried about it – but like most things, you worry for no reason – we did not get a lot of hate mail.”

Costa initially purchased 30,000 tokens for his five locations, and has replenished the supply with some smaller orders since then. But now those re-orders are like money in the bank – literally. That’s because the tokens are durable enough for years of usage. In fact, the only time that they need to be replaced is when customers purchase tokens but do not use them all. These “walkaways” can be a significant source of profit because each token that sells for a dollar represents a 70-cent profit margin since the tokens cost about 30-cents. Costa does not provide volume discounts, so each dollar token is sold for a dollar.

“We had a lot of walkaways the first year, then it tapered off and picked back up again” he said. Although he does not see a pattern in the walkaways, Costa readily admits “it is a viable revenue stream.”

Tokens also provide an opportunity for building goodwill when issuing refunds to customers.

“We’ve always had a 100% refund policy” says Costa. “We have refund comment cards at all of our locations and e-mail address and phone numbers posted. We might get a complaint that is unfounded but we sent them a check regardless.”

“I like tokens for refunds because if you lose a dollar in a vacuum I can send them $5 in tokens for about 80-cents in postage. I’ m sending them 5-times what they lost – and at 30-cents a token, it does not cost a whole lot – but you get a lot of goodwill for that. I don’t feel like I’m getting ripped off and we’re exceeding customers’ expectations.”

Another great opportunity with tokens – which is directly tied to walkaways – is the promotion that Costa gets from the tokens. Recall that a significant volume of the dollar coins that were dispensed were used for mementos or souvenirs. With no tie-in to American Pride Car Washes, these customers will soon forget where these unique dollar coins came from. The dollar tokens on the other hand are branded with the company name and a unique design which is truly American in nature – the Statue of Liberty. In addition to instilling a feeling of patriotism, these tokens also serve as “mini billboards” for the five American Pride Car Wash locations around the area. When seen with their pocket change, Costas dollar tokens not only remind his customers that it may be time to clean the car, but also where to go to accomplish this.

Brian Costa is sold on the idea of using tokens rather than dollar coins, and wishes in retrospect that he’d made the switch sooner. Like the scary movies, he learned that fear of something is usually worse that the thing itself. Now he’s reaping far more than token benefits from the changeover.