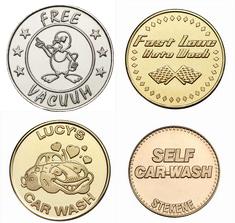 Re-Valuing Tokens A Key To Success for Car Wash

, OH – When TJ Shah bought the Kwick Stop Car Wash & Convenience Store in 6 years ago, he was familiar with the benefits of token-based car washes.  And since the facility was already using tokens, Shah figured he could focus his immediate attention on other issues.  But he soon discovered that Kwick Stop was not using tokens to their full advantage – so he made some changes.  The results have been substantial.

All Tokens Are Not Created Equal

One of the first aspects of token usage that Shah looked at was the value of the token.  The previous owners had valued the tokens at a single wash – or $3.  So customers would buy and then use all of the tokens.  “There was a 100% redeem rate” says Shah.

This meant that fewer tokens were required to transact business, and thus a smaller investment in tokens was required.  While normally saving money is considered a good thing, in this instance it was not.  Because customers would purchase tokens as they needed them and then use them at once, there were no tokens in circulation.  That meant that there were no tokens out there in customer change holders, cup holders, center consoles, or with pocket change to remind them it might be time to wash the car!

To be fair to the previous owners who devised this system, having the tokens in circulation would not have served much purpose because they were generic tokens – with no branding value.  Shah realized that he’d never be able to build his business on that business model, so he designed new tokens which include the Kwick Stop name and logo.  He valued the tokens at $1 rather than a complete wash, and then he ordered 5,000 – so he’d have plenty in circulation.  He’s been pleased with the results.

To incent people to purchase additional tokens, and thus get the extras into circulation –populating his customers’ cup holders, center consoles, and pockets with his advertising message – Shah sells 11 tokens for just $10.

“I tell them that this is a 10% return on their money” says Shah.  Customers get a great deal; he gets a $10 bill and gets tokens into circulation – so everybody involved is happy.

“Customers walk out with something that has my name on it,” he says, “so it is a reminder that I need to get the car washed, but also here is where I need to go.”

And if those extra tokens do not make it back to Kwick Stop’s coin boxes, well that’s alright too.  The tokens that Shah sells for $1 actually cost him around 30-cents.  So for each token that is sold but not redeemed – also called walkaways – Shah earns a 70-cent profit.

Increasing token usage has also helped Shah operationally.  Although he still accepts cash in addition to tokens, the new tokens have become more prevalent at the wash.

“We get many more tokens than other coins” says Shah, “so there is less labor for me to roll and take to the bank.  We have fewer coins to handle.”

These advantages are significant – who wouldn’t want to save time, right?  But the biggest advantage to the new tokens is the myriad marketing opportunities that they provide.

Shah, whose self-service bays have a $3 start, sells tokens in bulk for fleet usage.  Virtually any company or government entity with multiple vehicles is a potential prospect, including police, ambulance services, businesses with service vehicles, correctional facilities and taxis to name a few.  He may sell 50 tokens with a value of $1 each for $40.

He’s also planning to work with fund-raising groups in a similar fashion – providing tokens at a discount so that they can sell them at face value and keep the remaining cash for their group or organization.

“I’m planning to make up magnets with my business name on them,” explains Shah.  “I’ll put a token on it and then keep a stack of them with me.  Whenever I see a dirty car in a parking lot, I can slap a magnet onto it.  The wash costs $3 to start, and I’m giving them $1 for free.  Hopefully they’ll come to me and buy more tokens or pay for the wash, then keep my magnet on the fridge for advertising.”

If a customer does indeed redeem the free token and purchase additional tokens – say, 11 for $10 – then there is every likelihood that they’ll have extra tokens hanging around (and providing low cost advertising for Kwick Stop) until the next time their car needs a good wash.  And since the tokens tell them where to go, hopefully this cycle will repeat itself and become a habit.  If that is the case, then the idea to invest in magnets and affix tokens will be well worth it.

Another promotional aspect of tokens where Shah has had success is with local businesses that use the tokens as prizes for employee contests.  Here’s how a recent project with the local Midas muffler shop worked.

Midas managers were trying to have employees focused on selling ancillary services, so they established a contest for a month.  Whichever employee sold the most ancillary services in a month would receive the prize – which in this case is $50 worth of car wash tokens.

Perhaps one reason that Shah has had such success with this type of promotion is that everyone comes away a winner.  The contest winner earns the $50 in tokens.  The business purchases the tokens for a discount – say $35 rather than the $50 face value, so there is an immediate pay-back.  But the real payoff is that after the contest has run its course, the up-selling is now ingrained – and has hopefully become part of employee’s standard behavior.  That earns the company additional ancillary service sales not only in the contest month, but also in successive months to come.

The possibilities here are limited only by the operator’s creativity.  Another local restaurant ran a similar contest and achieved outstanding results, reports Shah.

“Restaurants can hold contests to see which server rates highest on customer surveys or secret shopper results, for example” suggests Shah.  Like the Midas example, servers continue to exhibit the outgoing friendly behavior after the contest has concluded.  “The suggestive selling, for example, is ingrained so the employees keep doing it after the contest ends – so the companies are happy.  It is money well spent” concludes Shah.

Whether marketed in bulk to fleets,  local businesses for their own sales contests, or  individual car wash customers, Shah’s new tokens are really paying off.  They are bringing more people into the wash (as evidenced by the much higher percentage of tokens to cash in the coin boxes).

Shah sums it up this way.  “I inherited about 200 tokens without a logo on them.  They were not shiny, with no branding and no professionalism.  I was embarrassed to hand them out.  Now I’m proud to use my new tokens with individuals and fleet.”

While some operators may think that “tokens are tokens” TJ Shah was astute enough to realize that this is not the case.  That insight and the changes that he’s made have helped to build business for Kwick Stop Car Wash & Convenience Store.  Best of all, there are lessons to be learned here that can be applied to other car washes.