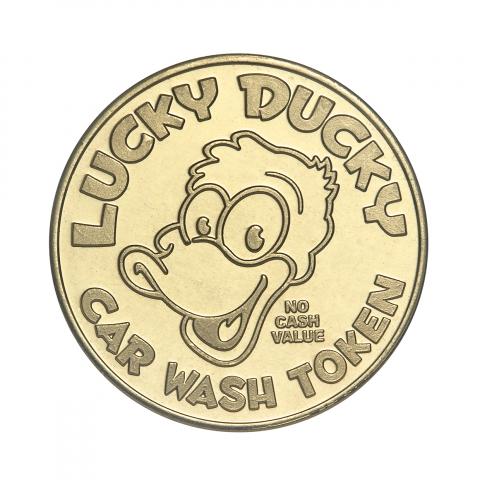 Cincinnati, OH – Marshall Hays runs three Lucky Ducky Car Washes in the Dallas, Texas area and has a total of 16 self-serve bays. He likes making money but finally realized that cash isn’t all that it’s cracked up to be. After fighting a losing battle with vandals and crooks who were stringing his changers, he switched from quarters to tokens (still valued at a quarter). He’s happy with the results – and wishes he’d done it sooner.

Although the car washes were all new to Hays, they had been around for decades - two were built in the early 80’s and the other was constructed in the early 70’s. They were quarter-based that entire time. But it seemed that the number of people visiting his changers only for change – and not to clean their cars – was starting to rise. The changers were strung several times, and repeated successful break-ins to the equipment room and damage to the vacuum machines, prompted Hays to re-consider whether cash was really king in the car wash business. Extensive research - especially on autocareforum.com – enabled Hays to learn from others who had faced the same situation. He quickly decided to convert to tokens.

But, rather than risk alienating customers who actually bring their own quarters, Hays opted to accept both quarters and tokens – though the changers dispense tokens only.

This gives customers more flexibility in how they pay, but it also meant that Hays had to replace the single coin acceptor Sensortrons that were installed in his bays. He chose Imonex mechanical acceptors for a couple of reasons. Number one, they have a model that will accept only quarters and the .900” tokens. And since his tokens were valued at a quarter, Hays was not as concerned with the security aspect. Also, the mechanical Imonex acceptors were about $100 cheaper than secure electrical acceptors.

After replacing the Sensortrons, Hays was able to sell them on eBay. He estimates that doing so cut his acceptor replacement cost to “about $10 per acceptor.”

He figures the time to change out the acceptors was a couple hours per location. There were also some “tweaks” required.

“My bay boxes are very dented from vandals” continues Hays “and we learned that the Imonex needs to be very level to avoid jams.”

There was also the issue of signage. Hays had large red signs made to inform customers – in both English and Spanish - that the changer would henceforth dispense only tokens.

With the mechanical side of the equation accounted for, there was still the tokens themselves to consider. Questions such as secure or non-secure, sizing and quantity to order were all aspects to ponder.

“We went with a non-secure .900 sized token so I wouldn’t have to alter my Hamilton Changer” continues Hays. “AND so that it wouldn’t be the same size as a Chuck-E- Cheese token since there is one located literally in between two of my car washes.”

Valuing the tokens at a quarter also played into the secure/non-secure question. Hays did, however, opt for custom graphics on each side of the token, taking advantage of the marketing opportunities that tokens provide. Some operators get very creative with their tokens – seeing them as mini-billboards advertising their car washes.

In terms of quantity to purchase, Hays gave this thoughtful consideration.

He knows that at some point he’ll have to reorder tokens to make up for the “walkaways” – the tokens that people purchase but do not use. But these walkaways are like money in the bank – literally. That’s because he pays less than 12 cents for the tokens and then sells them for a quarter – so he doubles his money each time a customer buys a token and then pockets it. Just six months after the switch, Hays figures that about 4,000 tokens have “walked away” – representing a profit of $500.

And since each token includes the name and logo of the Lucky Ducky, Hays is getting some branding at the same time. Customers who view his tokens with their pocket change are reminded to clean their car but also where to go to do so.

All of this sounds great on paper – but will the customers go for it?  Recall that these locations had been quarter based for decades – and humans are creatures of habit.

“Most customers liked the tokens, and understood the need for safety,” recalls Hays. “Many said if they owned the wash ‘they would do it’. Also, at the car wash that is in a very poor part of town, one customer pointed out that it has helped her from getting hassled for change by the vagrants that hang around. ”

All decisions include uncertainty – and uncertainty causes stress. Because we don’t know what is involved – we fear for the worst. But with diligent research Marshall Hays learned that operators had been through this before – and lived to tell about it. In fact, the changeover was not as difficult or time consuming as he originally feared – and the results are clearly worth the effort. His sites are much more secure now – and he’s noted a decrease in vandalism and stringing has been eliminated. He has also saved money because he no longer has to replace vacuum locks after break-ins, further enhancing the economics of the switchover.

There is one negative that Hays hadn’t considered previously.

“The only problem has been the amount of quarters I have to count and carry to the bank,” says Hays. “Before I had so many people coming by just for change,  that I seldom accumulated enough quarters for the bank. Now, instead of just taking grocery bags with cash in them, I have to lug 25lb bags of quarters. Yes yes, taking money to the bank isn’t a problem, but I’d rather not be as conspicuous in the bank parking lot.”

True, but at least Hays is the one taking his quarters to the bank, and not someone who acquired them by stringing the change machines.