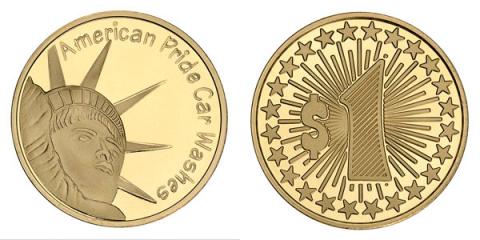 Looking for Ways to Differentiate Your Car Wash?

These Proven Marketing Ideas are More than a Token Effort

– Competition is alive and well in the car wash industry.  And while it might be easier to carve out niches within segments like hand-washing or detailing – that can be a daunting task for self-serve car washes.  But with some creativity and imagination, operators can differentiate their washes from others – despite, in some instances, higher pricing. Here’s how some operators are achieving more than token success with these car wash marketing ideas.

Let’s try a little experiment.  Reach into your pocket and pull out some change.  Got a quarter or two in there?  Good – now try to remember where you got them.  What store did you visit and what did you buy when you got that quarter back as change for your purchase?

Now imagine that you have a car wash token in with that change.  For the sake of our experiment, let’s assume that the token is a custom token and includes a car wash name and logo.  Suddenly there is a memory associated with it!

The opportunity to build your brand and promote your car wash each time  a customer sees your token amidst his other pocket change is one of the  main  reasons  so many car wash owners are sold on the use of tokens.  It is also why some operators refer to them as “mini billboards” and “the cheapest form of advertising around.”

That sentiment is echoed by TJ Shah, owner of the Kwick Stop Car Wash and Convenience store in .  “The biggest advantage that tokens offer is professionalism” says Shah.  “Your name and logo is on that token – you are creating and reinforcing your brand.  Not only are you reminding them that they need a car wash, but you are also telling them where to go to get it.” Whether the tokens are kept with pocket change or in a cup holder or ashtray, “Each time they see it, they think ‘Oh, I’ve gotta use this’” continues Shah.

Cash, on the other hand, has no memory associated with it, so seeing it stirs no recollections or inherent calls to action.

While custom tokens are slightly more expensive than standard tokens (because of the one-time die charges) – they offer not only branding and marketing opportunities, but also more security than standard tokens.  Custom tokens valued at a dollar, for example, might be larger and more robust than a standard brass token valued at a quarter – such as those commonly used in arcades.  You can set your coin acceptors to take the dollar-value tokens as payment, while rejecting the smaller arcade tokens.  This limits cross-acceptance, and ensures that you are only dispensing services for customers who have purchased your tokens.  Coin acceptors can typically be set to accept both tokens and government minted coins – so that customers who opt to pay in cash can still purchase a wash at your facility.

That was important to Brian Costa who operates five American Pride Car Washes on the west side of Cleveland, OH.  He wanted to make it easy for his customers to purchase a wash within one of his 29 bays or 6 touchless automatics at his varied locations.  “Every piece of equipment that we have accepts tokens” says Costa.  “We accept tokens everywhere, but we are not token-only.  We accept cash too, but we dispense only tokens.”

Costa has his tokens valued a $1 each – and he sells them at full value – with no discounting for volume.  So if a customer buys ten or twenty dollars worth of tokens, he can wash his car in the self-serve bays, then use extra tokens to start the vacuums, and even purchase air fresheners from his Fragramatic machines.  Since all that work is likely to stir up an appetite, customers can also purchase snacks from numerous vending machines strategically situated on the American Pride facilities.

If a customer still has tokens left, not to worry, as those can be used on the next visit to any of the five American Pride Car Washes.

In addition to the branding that occurs each time a customer sees a custom car wash token with their pocket change or in the cup holder of their car, there are other promotional aspects to which tokens lend themselves.

Shah, whose self-service bays have a $3 start, sells tokens in bulk for fleet usage.  Virtually any company or government entity with multiple vehicles is a potential prospect, including police, ambulance services, businesses with service vehicles, correctional facilities and taxis to name a few.  He may sell 50 tokens with a value of $1 each for $40.

He’s also planning to work with fund-raising groups in a similar fashion – providing tokens at a discount so that they can sell them at face value and keep the remaining cash for their group or organization.

Another promotional aspect of tokens where Shah has had success is with local businesses that use the tokens as prizes for employee contests.  Here’s how a recent project with the local Midas muffler shop worked.

Midas managers were trying to have employees focused on selling ancillary services, so they established a contest for a month.  Whichever employee sold the most secondary services in a month would receive the prize – which in this case was $50 worth of car wash tokens.

Perhaps one reason that Shah has had such success with this type of promotion is that everyone comes away a winner.  The contest winner earns the $50 in tokens.  The business purchases the tokens for a discount – say $35 rather than the $50 face value, so there is an immediate pay-back.  But the real payoff is that after the contest has run its course, the ancillary services selling is now ingrained – and has hopefully become part of employee’s standard behavior.  That earns the company additional sales not only in the contest month, but also in successive months to come.

The possibilities are limited only by the operator’s creativity.  Another local restaurant ran a similar contest and achieved outstanding results, reports Shah.

“Restaurants can hold contests to see which server rates highest on customer surveys or secret shopper results, for example” suggests Shah.  Like the Midas example, servers continue to exhibit the outgoing friendly behavior after the contest has concluded.  “The suggestive selling, for example, is ingrained so the employees keep doing it after the contest ends – so the companies are happy.  It is money well spent” concludes Shah.

A Token in Appreciation for Customer Feedback

In addition to the branding and self-promotion that is inherent with custom tokens, there are other marketing aspects that Costa appreciates.  He uses them to refund customers who have had issues with change machines or equipment on his site.

“We’ve always had comment cards on site and signage with phone numbers and e-mail addresses” says Costa, “and we’ve always had a 100% refund policy.  Even if a complaint is unfounded, we’d send them a check, regardless.”  But with tokens, Costa goes beyond merely refunding the customer’s money, creating goodwill in the process.

“If they lose a dollar in a change machine” he says, “we’ll send them five tokens valued at a dollar, or five-times what they lost.”

He figures that the cost to mail five tokens is about 80-cents – plus the cost of the tokens themselves.  But keeping customers happy – and keeping them coming back is what’s important.  So Costa prefers to look at the lifetime value of customers when he sends refund tokens.  Judging from customer comments, American Pride is creating a lot of goodwill – and repeat customers - with this approach.

Other Operational Aspects of Token Usage

In addition to the extra traffic that can be generated with these creative marketing approaches, tokens also offer a unique benefit that no cash-based system can ever match.  The simple truth is that some of your customers will buy tokens – perhaps taking advantage of volume discounts – which they will never redeem.  Called walk-aways or walk-offs because they “walk off” before the service is delivered, these represent a significant income stream.

Tokens are very durable – and can survive years of continued use (and abuse).  Realistically, the only reason to replace them is because customers have purchased them and either lost or misplaced them – in short due to “walk-aways.”

Most operators see a fairly large “walk-away” issue soon after they switch to tokens.  This can be attributed to getting tokens into circulation.  Often customers who purchase in volume will hold unused tokens for the next trip - since they will ultimately be redeemed, these are not truly “walk-aways.”  Eventually, though your token volume will reach equilibrium, and you’ll likely have to order more tokens to replace those which are now out of circulation (lost).  But don’t despair – that is a good thing! Tokens, which cost around 30-cents, are sold for $1, so you’ve earned a 70-cent profit for each “walk-away.”

Costa, who purchased 30,000 tokens for his five American Pride Car Wash locations in early 2001, says he “has replenished a couple of times.”  While his replenishment needs are somewhat erratic, he concludes “you don’t get rich from walk-offs, but it is a good revenue stream.”

Tokens are helping Costa save time as well.

“We’re definitely making fewer trips to the bank” says Costa.  Imagine if you could eliminate a couple of bank runs a week- you could probably gain an hour or more a week.  There might be other less obvious time savings as well.  Say for example, if you switched from a quarter-based operation to dollar-valued tokens, you’d now have to empty your coin boxes less frequently – since the volume would be ¼ of its “normal” quarter-based volume.  So...what could you do with an extra couple hours a week?  Maybe spend more time planning your business – rather than merely reacting?  Or maybe you’d have time to implement some of those creative marketing endeavors or fleet programs that you haven’t been able to yet?  Or better yet, take a little time off!

With a token-based system, you can enjoy additional time-savings plus some extra income to spend on your well-earned time off.  And isn’t that why you got into this business in the first place?