An Extra $1,500 a Month, Just from Using Vacuum Tokens 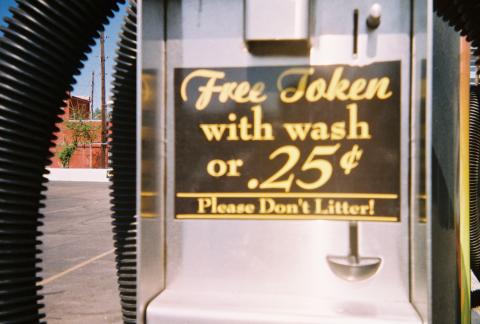 Cincinnati, OH –During the revamping of his BP Car Wash in (Maumee, OH) 5 years ago, Mark Clarkson installed free vacuum stations as a way to reward his customers for their business.  Then, just a few short years later, he realized that this free service – which even non-customers could use - was costing him plenty.  “There were some people who were abusing it” recalls Clarkson, “they’d stay there all day.  It was eating me alive in vac motors and brushes.”

So Clarkson converted the free vacuums, which he originally purchased from JE Adams, to pay vacuums, by adding coin mechanisms which would accept coins or tokens.  That way, he can give tunnel wash customers a free vacuum token worth $1 or 4 minutes.  If they want more time than that, they can purchase additional time using quarters.

“We went to 25-cents figuring I’d cover my costs of operation and maintenance” recalls Clarkson, who says the whole process was simple, and inexpensive.

“I did not have to change the timers - I just went in and installed the coin mechanisms.”   Converting all 8 vacuum cleaners from free to token or coin-operated “cost about $1000” says Clarkson, who continues, “I had my money back in 2 weeks.”

Since then he has been happy with the decision.  “I can’t believe how quickly the quarters add up” he comments.  “People tell me ‘you should charge 50-cents or 75-cents because everyone is priced there’ but I figure ‘don’t look a gift horse in the mouth.’”

One aspect of the program that he has switched however was his vacuum token supplier.  He recalls purchasing the first order of 3000 tokens and a subsequent 5000-token order from Sonny’s Enterprises for about 17-cents each.  Since then he has opted to buy his standard brass tokens from TokensDirect which he does online for “about 12-cents each, including shipping.”  At that rate he figures “even on the ones that do not come back, I’m still doubling my money from 12-cents to a quarter.”

And those vacuum tokens and quarters really add up.  “I never dreamed we’d make money on it, but it has turned out real well for me” says Clarkson.  So who can blame him for not nudging vacuum prices up – after all, $1500 a month is not a bad bump in revenue.