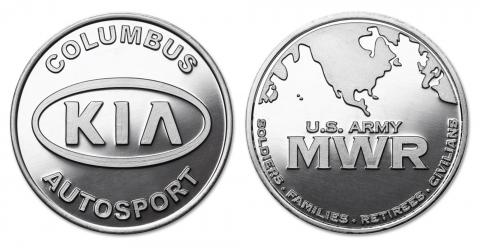 (Cincinnati, OH)  Whether huge events open to all on-base personnel or smaller venues for particular units there are many Family-and- Morale-Welfare-and-Recreation (MWR) sponsored events at Fort Benning, Georgia.  And since the old adage that an army marches on its stomach is true even in peacetime and during on-base activities, there are typically multiple food vendors on hand.  Accountability is guaranteed and cash handling is simplified thanks to the custom tokens that are used as a means of exchange at each event.

Rather than using cash to pay for BBQ, pizza, corn-on-the-cob, ice-cream or other culinary treats available from the various food vendors, soldiers and their families purchase tokens from a centrally located token booth.  The tokens, which are valued at $1 each, are then used to purchase food items.  At the end of the day (or the event), vendors bring their tokens to the token booth and receive cash (less the agreed-upon percentage due to the Directorate of Family and Morale, Welfare and Recreation for booth rental).

Keeping cash in a central location simplifies cash handling – as booths are sometimes staffed by volunteers (who prefer not to handle cash).  Centralizing cash handling also makes security easier since all of the cash is in a single location rather than being spread out over a wide area.  End-of-event reconciling is also simpler and faster with tokens.  Valuing the tokens at $1 each also simplifies the operation since none of the booths have to make change.  Best of all from Benning MWR viewpoint is the built-in accountability.

“Some of these events are huge, like the community-wide Oktoberfest with tens of thousands of attendees,” said Nathan Shuler, MWR budget analyst.  “With so many people, in a fast-paced environment, it is easy to lose track of product sales.  The tokens simplify the process all around.”

MWR recently purchased 50,000 of the custom tokens from Cincinnati’s Osborne Coinage/TokensDirect.  Although the tokens are collected and re-used from event to event, it is not uncommon for some to end up in patrons’ pocket-change.  Some may also end up as souvenirs or keepsakes – especially for visitors, or soldiers and families who are shipping out to other bases.

The most recent purchase was also partially underwritten by the local sponsors.  Each of the 50,000 tokens purchased includes the sponsor’s logo on one side – and the Fort Benning Directorate of Family, and Morale, Welfare and Recreation logo on the other.  Sponsors benefit from the advertising while the sponsorship fees help to underwrite this and other MWR programs within the community.

While an army may indeed march on its stomach – accounting for the food eaten is simpler thanks to this token-gesture by Fort Benning MWR.